I have been reflecting A LOT on my life  and the world as it now is —  particularly in the United States!

Next month it will be 67 years since I entered the world for this life’s journey!  67 years since that April day when I slipped from my Mother’s womb at Emerson Hospital in Concord, Massachusetts with Dr. Robinson officiating.

I would be joined by three brothers, a single when I was 18 months and twins when I was 4.  That made a family of four boys with the oldest 4!

Life was so different back then!  We had no electronics. We played outside regardless of the season and enjoyed long winter days as much as the summer days. We played together and with the kids nearby.  We were taught to be polite and respectful. WE did not control the family as so many kids do today.  Our parents did not jump at our every whim and command/demand!  We were good kids, the things that resulted in punishment would be overlooked today  and usually concerned how we were treating each other and others!  Name calling, lying and swearing were never acceptable and we all had our mouths washed out with ivory soap to reinforce this! We brought home good grades, not because we were smart (we all were!) but because it was expected!

We interacted as a family and always sat down together for the evening meal! Together, at a table, no electronics!  and LOTS of conversation. We talked about our day, school, things we had heard or were curious about.  We had close relationships with our Grandparents even with one set 8 hours away and the other a full two day drive in this time prior to fast interstate highways. We wrote letters, read books and had responsibilities at home that were expected to be accomplished without discussion and without reminders.  They were garden, lawn and household chores that were our responsibility as members of the family — our contribution!

We spent two weeks each summer at Star Island, visited both sets of Grandparents and spent time with family friends at our place and theirs.

Television entered the picture along the way – black & white – and very limited!  Basically Disney World and Wagon Train and an occasional Saturday Sky King or Flicker before we were out to play. We entertained ourselves, built forts and secret club houses (complete with funnel urinal) renovated a small barn for some bottle lambs we were given using a hand saw and salvaged lumber and nails.

We were not given everything we asked for, as kids often are today, and seldom asked! We were taught to work and save for what we wanted and required to do so. The lessons started  when I was 4! I wanted a regular two wheel bike. We were living short term in Horseheads, NY and the Good Humor truck came by daily — ringing that ice cream bell that had all the kids running with their dimes! Mother sat me down and talked to me about how many 10 cent ice creams equaled the bike I wanted and offered me a choice! I chose the bike.

We all played musical instruments and participated in school concert and marching bands. I was editor of my class’s yearbook.  College was never a question — we just always knew that was the next step for each of us.

I was aware of politics and loved our history as a Country. I remember sneaking to watch the Kennedy / Nixon debates and shutting the television off when my parents drove in the drive!  Back then the televisions took forever to totally shut off – that damn, long lasting, tattling point of light in the center of the black screen!  One side of the family was Conservative Republican and the other Liberal Democrat !  This was in the day when both sides were honorable and respected.  When even as a Liberal Democrat I  LOVED sitting in the Senate Gallery and listening to Republican Senator Everett McKinley Dirksen filibuster. 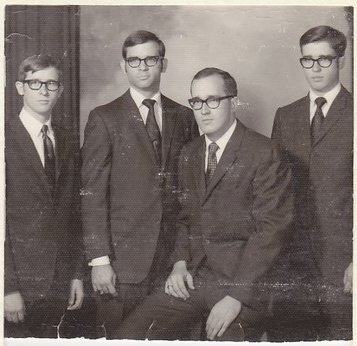 It was my love of government and politics that had me choosing The George Washington University in Washington, D.C. – Four wonderful years where the Library of Congress was my library! and one could walk in to the Senate Dining Room and order lunch — The bean soup was famous as well as delicious and I never knew who would be at the next table or what conversations I would over hear. Great years for education and to be in Washington!

It was a Gay baby boy that was delivered in to the world that day nearly 67 years ago!  Times were different back then and being Gay was not okay!

During my` years at The George Washington University I considered for the first time actually telling my family. Wanting so desperately to just be me and assuming I was loved enough to be accepted in this new light. Just before I garnered enough courage to do so, my next brother who was straight and a marvelously gifted musician, announced that he planned to go to Julliard and study music. I was in our library that fateful day when Mother forbade him to pursue those plans because “only queers went into music”. BAM! Two sons shot down at once. I wasn’t prepared at that time to lose my family.

And thus the idyllic world of my youth transitioned to adulthood.  Number 14 in the First Draft Lottery meant four years in the USAF and thwarted plans for law school and politics. This was the beginning of the unraveling of our country – The protesting and the total lack of appreciation for anyone serving in the military.

Honorable discharge and two new small businesses with one of my brothers on the Maine Coast – “Peaslee Park Antiques” and “The Christmas Shop” – Both would come full circle 40 years later with our opening Shops At Fayrehale: Antiques, Christmas, Gifts.  A good 20 year Marriage with Sharon and the adoption of two girls (12 & 15) with me having a major positive role to play in each of their lives. Masters Degrees in both Education and in Counseling and Human Development, both used to work very successfully with Emotionally Handicapped Students.  Divorce (for reasons other than my being Gay), Coming Out, finally! and in the Ice Storm of 1998 meeting the man who is now my Husband.

It is hard to pinpoint the beginnings of the destruction of the world I grew up in. The assassination of a President? The resignation of another? The election of a President who advocated trickle down economics and started the bleeding to death of the middle class? The court enthroning of another who would start unpaid for wars for oil and give tax breaks to those who did not need them?  I guess it has been a gradual 50 year decline that accelerated  over the last 15 years.

Today we find a Country and society so divided that the two sides can not talk and/or work together. A society that has separated from one another and lost all sense of compassion for others!  Families are run by the children who start as toddlers to dictate what the family will do and it is all kid centered. Parents no longer parent – they run themselves ragged catering to every whim and demand of of the children they brought in to the world and turned in to Monsters! (NOT all!!  I know some good parents who are raising some responsible children but they are unfortunately a small minority)

Families no longer sit down for regular meals and if they do, far too often the electronics come to the table!  Creativity is no longer encouraged and heaven help those who think outside the box or question those in power.  There is no privacy. Little sense of community and connection and far to little sincere caring for those less fortunate.  It has become an instant gratification world where kids are passed everything they want and have no concept of working and saving. They have lost most connection with their food sources and with nature.

Manners and respect seem to be part of history!  “Please”, “thank you”, “how may I help you” and holding doors all part of the past. There is a big void in life that causes many to turn to drugs and crime.. A hollowness that results from being isolated from the people around them (close around them) and from nature! A hollowness enhanced by having no role in family survival, no chores and no responsibilities

YES!  I am BLESSED To Be The Age I Am !!!    I do not even want to imagine what life will be for those currently in their 20s & 30s and their children, over the next 60-70 years and I have no regrets that I will not be here to experience it.

I find myself fighting to stay aware of news that is no longer news – it is all Media Manipulation – fighting to resist letting my Noah John Rondeau side triumph and turning this beautiful small spot in Vermont in to my Walden!   Connection with nature and animals helps me stay sane in an insane world. Sleeping outside seasonally nourishes my Soul.

Electonics do let me connect virtually with the like minded people that are scattered far and wide.. That is the problem, scattered when life would be enhanced by clustering. The Hippies knew something when they gathered in communes in the 60s.

I do not know how much time I have left in this Life’s Journey and when I come back for the next one, I would prefer it be elsewhere. I see nothing to be gained by coming back to the United States!

One side of the family passed over at 72 and the other lived well into their late 80s and 90s.  Assuming I can average out those two extremes, I have some more years left and those will best be spent continuing to develop as high a level of sustainability as possible on this small piece of land we hold for the short term and getting rooms in the house renovated so we are able to have like minded people pass through and stay a spell.

As I prepare next month to start my 68th year, I can smell Spring and there is hope!  NOT hope for the world that was, as that is gone forever, but hope that I can continue to create a good life here and stay connected as personally as possible to similarly connected folks for the years I have left.

Enter your email to receive updates about Fayrehale Farm and Shops at Fayrehale.

We Are Proud Of How We Ship – Shops At Fayrehale – Orders
Ah! – April 11th – You Come & Go As You Commemorate Another Year In This Life’s Journey!

One Response to BLESSED To Be The Age I Am !!!